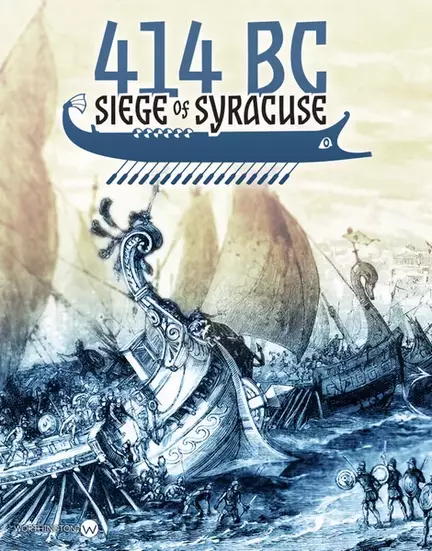 These games are designed for easy setup, quick game play, and can be finished in under an hour. Game marker placement is shown on the game board. Command orders and cards are used to shorten the rules. Developed for solitaire play, this game requires you to make great decisions based on good strategy, keeping your wits about you when orders do not turn out well, and pressing on to victory.

Game play is centered around using Field Commands to issue orders by the Athenian and Syracusan commanders to defeat each other. Either side can be defeated by their morale falling too low. The game allows you to play either side against a solitaire opponent that has 3 levels of difficulty.

Pick the side you want to be, Athenian or Syracusan, and then shuffle the solitaire card deck for your opponent. The card mix used by the solitaire opponent differs from game to game so no two games play alike.

Each commander (solitaire or player) can issue one order per game turn from their Commands available. Your order is carried out based on your strategy and current situation faced. Your choice can cause multiple actions and reactions with results that cause troop eliminations, morale reductions, and events to occur.

HOW TO WIN THE GAME

Any time one side's morale reaches zero during a turn, the other side wins the game.

2 sets of troop markers (one set per army)

2 Field Order Books (one per army)