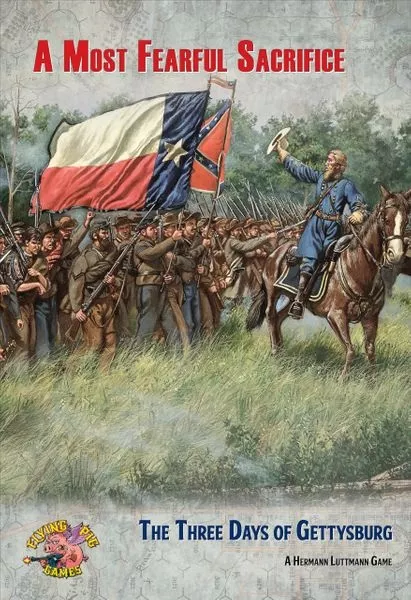 A Most Fearful Sacrifice: The Three Days of Gettysburg

It's early on July 1st, 1863, and Union Brigadier General John Buford’s 1st Reserve Cavalry Division is deployed to the west of the town of Gettysburg battling unidentified Confederate infantry advancing on the town.

All morning long, the men in gray have pressured the Union cavalry.

Help finally arrives in the form of I Corps commander Major Gen.

John Reynolds. He rides up to the Lutheran Seminary, where Buford is directing the battle from its cupola.

Reynolds calls to Buford, "What goes, John?" The cavalryman simply points to the long lines of advancing Confederates and says, "The Devil's to pay!" Reynolds then asks, "Can you hold?", to which Buford responds, "I reckon I can."

Reynolds ends the exchange with, “Let’s ride out and see all about it."

And with that rather brief, mundane conversation began one of the most important and iconic military engagements in history – the Battle of Gettysburg.

A Most Fearful Sacrifice is an epic two-player wargame with over 15 square feet of playing area and 526 playing pieces depicting the fighting that occurred during all three days of this decisive clash.

The game utilizes a new ACW operating system called the Black Swan system, which is closely related to the popular Blind Swords game system first introduced in the game The Devil’s To Pay! by Tiny Battle Publishing.

This version of the system is specifically designed to handle larger-scale battles yet keep rules overhead low.

Players can simulate huge encounters in a reasonable amount of playing time.

This is accomplished in one way through the use of card draws rather than chit pulls.

Also, players will trigger activations by Corps instead of by lower-level formations but they still have tactical decision-making choices by needing to determine which Divisions get activation priority.

Though at a grander scale, this system maintains a tactical feel about it and still emphasizes the three “FOW’s” of war … the Fortunes of War, the Friction of War and the Fog of War.

Players will be challenged to deal with a constantly developing battle situation, never quite sure of what the Gods of War will throw at them, and thus they must always be prepared to deal with historically realistic “black swan” events.

1 – Full color scenario Book with THIRTEEN scenarios. Nine use one of the two maps, four use both.