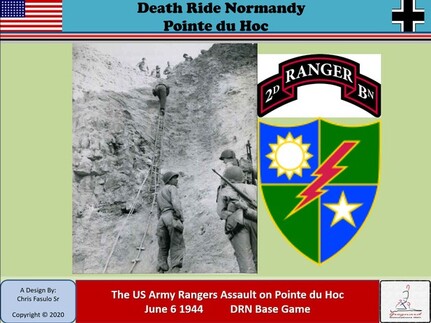 Death Ride Normandy   This game is going to cover the entire Normandy campaign from 6 June 1944 up to Cobra.

It will be as grand a game as Death Ride Kursk and have all the richness of that game series.

This series will be broken down into many smaller games.

The Base Game focuses on the operation at Pt du Hoc conducted by elements of the 2nd Ranger Battalion.

Along with this initial offering is Death Ride Normandy - Omaha Beach.

I am also working on the other beaches will all take the game from the invasion through the end of 10 June 1944.

Death Ride Normandy is the latest in the Death Ride series of games. It is a platoon scale wargame that is planned to depict the entire Normandy landings at 330 meters per hex. This follows Chris Fasulo's M.O. of creating massive wargames on particular battles in the vein of Death Ride Salerno and Death Ride Kursk. If massive footprints full of counters doesn't appeal to you, this is not the game/system for you. If it is, this is definitely worth a look, and if you appreciate the system and its almost extreme depth of detail in tactical operations on a grand scale, more than worth the price of admission.

Pt du Hoc is the first game in the Death Ride Normandy series. To play Death Ride Normandy Omaha Beach, you need to purchase Pt du Hoc, as it contains several player aids and the rules necessary to play. Purchasing Pt du Hoc would only make sense too, as it is a smaller footprint and counter density. This would allow the gamer to learn all the aspects of the game, allowing for an easier learning curve.

The components are very good. The counters are Death Ride standard. The counter art is clear, nothing fancy. The units have NATO-similar art for the infantry/artillery, while the armor have no frills, easily identifiable side views. The landing craft are top down views and the aircraft have a fairly detailed side view. The counters are thick and easy to grab with fingers or tweezers. The only thing some people may not like, is having to cut the counters out with an x-acto knife. If not, the corners will have a lot of flash, which if you clip/round the corners, isn't an issue anyway.

The rules are spiral bound and with good cover art and a 7 page table of contents. The rules are like most Death Ride rules, small font, fairly dense and few illustrations. The rules are written clearly and follow the sequence of play. They are not light, but at the same time not overly complicated. These are rules that take a bit to digest and get some turns/games played through. The detail of the rules cover most anything that might arise during a game and the table of contents makes referring to sections quick. A spiral bound supplement is also included that gives some Pt du Hoc specific information and a short historical commentary.

The player aids, a first me, are spiral bound too. They include sequence of play, commo tables, terrain effects chart, artillery-fire combat-assault combat tables. Supply, patrol, German shore battery fire, paradrop and beach obstacle tables are included. Loose player aids include turn record, reinforcement, loss tracks, mechanics examples and orders of battle are all on quality cardstock and in both these and the spiral bound components are all in color.

There are 4 11x17 maps that are well done and cover the are of Pt du Hoc and a ways inland. The battle itself not only covers the invasion, but also relief by units of the 29th Infantry Division. This pushed the depth of the game to not only covering the taking of the battery and the Rangers digging in, but also of the German counterattacks and their relief. The maps for PT du Hoc fit alongside the Omaha Beach maps to combine it in to one monster scenario worthy of the Death Ride series. Three D10 are included.

The components are very good quality. They provide a solid base from which to set up and learn all the facets in a smaller game that can be applied later to the larger Omaha Beach game. Kudos to Chris Fasulo on another high quality production.