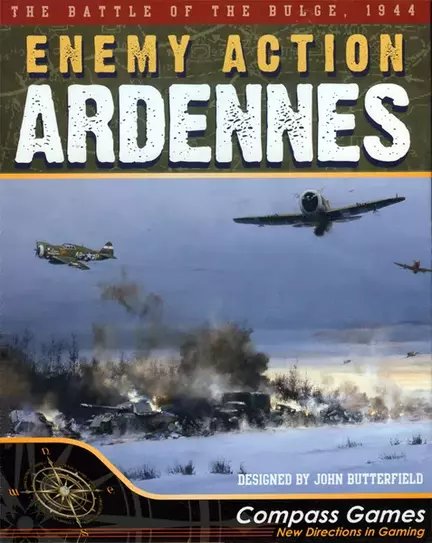 John Butterfield’s unique card-driven mechanic allows players to use multiple resources in multiple ways but each decision has a consequence, many of which aren’t evident at the time. Resources include units and cards. So two different cards can be used to activate the same unit/s, but each card may have a different secondary use that could include artillery support or even activation of more units (or group of units).

The combat chit system is yet another decision-making point. Players choose and reveal a number of combat chits that varies based on a number of factors. The minimum and maximum number is dependent upon unit capabilities, terrain and support, but not combat factors (so no factor counting here). This choice can often get an attacker into trouble by going for “a chit too far”… Or it might even be a masterstroke to take that extra chit…

The first game in the series is Ardennes. The game portrays the German offensive against the western Allies in December 1944 — the Battle of the Bulge. Each player controls the German or Allied side. When playing solo, the game system controls the other side. So Enemy Action: Ardennes is effectively three games in one box: the two-player game, solitaire playing the Allies, and solitaire playing the Germans.

Map scale on this module is 2.5 miles per hex. Hexes on the game map are oversized allowing for easy counter handling. Unit scale is regiment, brigade and division, with one to four steps per unit. Each turn represents one day of the battle, with several alternating player impulses in each day.

For solo regler Allied : TRYK HER

For solo regler German: TRYK HER

Regler for 2 spiller: TRYK HER