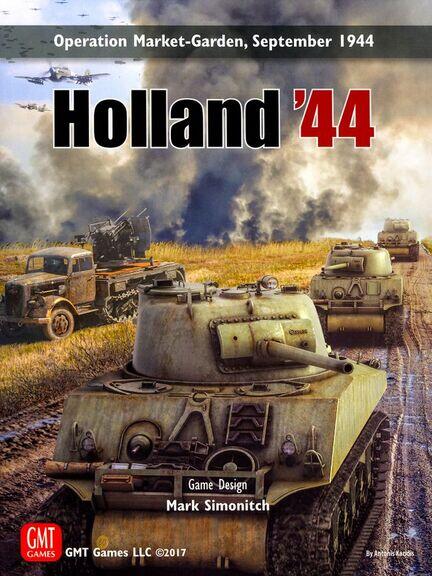 The game starts with the airborne landings on September 17th and continues until September 23rd. The Allied player must rush his ground forces forward as fast as possible to relieve his beleaguered airborne divisions and capture a bridge across the Rhine.

The scale of the map is 2 kilometers per hex and covers the battlefield from the Belgian border to Arnhem. The map also includes the area where the British 8th Corps fought on the right flank of 30th Corps.

Most units in Holland ‘44 are battalions, but units range from Company to Brigades.

Holland '44 uses a system very similar to Ardennes '44: The Battle of the Bulge. It is basically a simple move-fight, I-go then u-go game. If you have played Ardennes ´44: The Battle Of The Bulg or Normandy '44 you will have no trouble learning the game. Rules such as ZOC Bonds, Determined Defense, Extended Movement, and Traffic Markers all make their reappearance. Due to the terrain of the Netherlands, special attention was given to river crossings, bridge building, and fighting in the flat polder terrain.