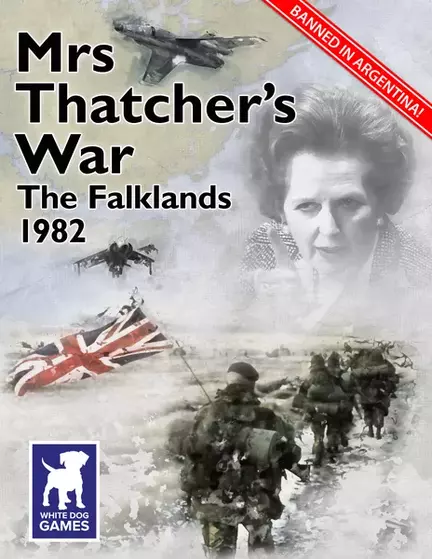 It is two games in one: a naval/air game (whose mechanics are based on the author's "Don't Tread On Me" system, but using ships and aircraft instead of armies!) in which the British Player fights against the game system's Argentine "A.I." to establish control of the skies; and a ground game (modeled after the game system featured in the author's "Mound Builders" and "The First Jihad") in which the British Player takes advantage of his air superiority to fight and 'yomp' his ground troops across East Falkland to final victory -- or defeat -- in the hills around Stanley.

The game features all the historical chrome for which this design team is so well known, including Exocet missiles, Falkland Islander civilian resistance, diplomatic shuttles, covert Soviet aid, SAS guerilla missions, Chilean intervention, US assistance, the Gurkhas, helicopters, "ace" pilots, and even the Pope!