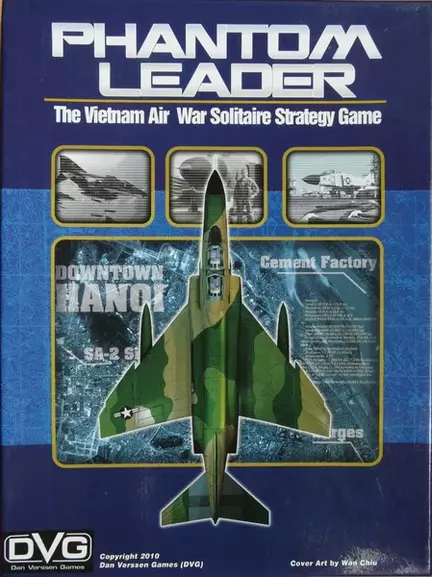 What's New in the Deluxe Edition?We have expanded and updated the original Phantom Leader game to the high standard set by our Hornet Leader game.Increase the cards from 165 to 330- All pilots get all 6 experience levels- Add new aircraft: Air Force F-5, Air Force A-7, Navy A-4- Add more pilots for all aircraft types- Add more Target cards- Add more Special Event cards- Revise the 6 original Campaigns to include the new Targets and AircraftAdd Air Force and Navy Campaigns for the 1962 Cuban Missile CrisisUpgrade to a mounted 11"x17" Tactical DisplayDescription:Phantom Leader places you in command of a US Air Force or US Navy Tactical Fighter squadron in Vietnam between 1964 and 1972. You must not only destroy the targets but you must also balance the delicate political repercussions of your attacks. If you strike too hard, your air offensive might be put on hold, strike to light, and you'll be blamed for losing the war.Welcome to the Vietnam Air War!Each of the campaigns can be played with either an Air Force or Navy squadron. The targets assigned to each service are different and change the complexion of the campaigns. Each campaign can be played with three different durations of: Skirmish, Conflict, or War.Each mission takes roughly 30 minutes to set-up, plan, and resolve.Each of your pilots has their own skills. Selecting the right pilots and weapons for a mission is vital to its success. As you fly missions, your pilots will gain experience and fatigue. With experience, their skills improve, but as their fatigue increases, their skills decrease and they might not be able to fly for several missions.For those of you familiar with our modern era Hornet Leader series of games, you might be wondering what's different about Phantom Leader.The freedom of being able to select the best mission based on military objectives is something that is commonplace for today's military. Back in Vietnam, the military was responsible for carrying out their orders, while at the same time being extremely limited in the weapons and tactics they were allowed to use to complete those orders. In many cases, the specific weapons, approach paths, and bombing altitudes were generated target-by-target at the White House. The mission specifics were then sent down the chain of command to the individual pilots flying the mission. As you can imagine, this was not the best way to run an air campaign.Every target has a Political value. If you destroy it, you move the Political counter to the right a number of spaces equal to its value. As the counter gets moved to the right, your future target choices are reduced to those that are less politically sensitive. Which target you choose not to attack is also important. You get to move the Political counter to the left a number of spaces equal its Political value.This means that while you might like to flatten a big enemy target and rack up the victory points, it might be better for you to choose a pointless target and move the Political counter in your favor instead.Another difference is in combat power. For the last couple decades, the US Air Force and Navy have enjoyed air superiority due to training and technology. Such was not the case in the skies over Vietnam. The enemy had different, but just as capable, equipment. They also had the training and will to use it to its utmost.They soon became aware of the limitations placed on the US forces by the politicians, and used those limitations to their advantage.For example, at times, US pilots were not permitted to fire on enemy aircraft until they were visually identified. This negated any range advantage conveyed by the radar-homing AIM-7 Sparrow missiles. It was also a common limitation that enemy aircraft could only be attacked in the air. US pilots were not allowed to attack enemy airbases. US aircraft were also limited to flying predictable flight paths, at set times. This made setting up ambushes much easier for the enemy.So, while you might be a Hornet Leader ace, Vietnam is a whole different ballgame!Components:330 Full color CardsFull Color Rulebook2 Full Color Counter Sheets (176 - 5/8" counters)8 Full Color Campaign Sheets1 11"x17" Full Color Mounted Tactical Display2 Full Color Sheets1 Ten-sided die1 Full Color Player LogAircraft:F-4 Phantom IIs (USAF)F-105 Thunderchiefs (USAF)F-100 Super Sabers (USAF)F-104 Starfighters (USAF)F-105G Wild Weasels (USAF)F-5 Freedom Fighters (USAF)A-7 Corsair IIs (USAF)EB-66 (USAF)F-4 Phantom IIs (USN)A-4 Skyhawks (USN)A-6 Intruders (USN)F-8 Crusaders (USN)A-7 Corsair IIs (USN)EA-6 (USN)Campaigns:1962 Cuban Missile Crisis (USAF)1964 War in the South (USAF)1967 Rolling Thunder (USAF)1972 Linebacker (USAF)1962 Cuban Missile Crisis (USN)1964 War in the South (USN)1967 Rolling Thunder (USN)1972 Linebacker (USN)