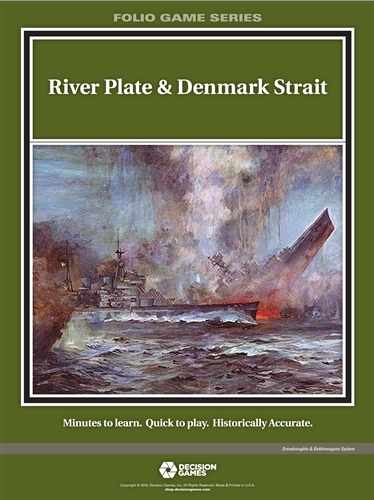 Each counter depicts a single ship or the information markers required to denote a ship’s damage, special ship movement, or configuration. Ships are rated for weight of fire, range, structural integrity, maneuver, speed, and special capabilities.

The Battle of the River Plate simulates the naval encounter between the German Panzerschiff Admiral Graf Spee and the British Royal Navy Cruisers HMS Exeter, Ajax, and Achilles on 13 December 1939. The historical outcome led the Graf Spee to seek shelter in Montevideo, Uruguay, where she was subsequently scuttled.

The Battle of Denmark Strait simulates the encounter between the German battleship Bismarck and a British squadron on 24 May 1941. The historical outcome sent HMS Hood to the bottom and damaged HMS Prince of Wales, but Bismarck suffered seemingly minor damage that would lead to her eventual destruction.

These games are designed for quick learning, easy play and are a great value. They are perfect for a new gamer starting out as well as a great break for veteran gamers from our larger games. We’ve started off with 18 games from Chalons, an ancient battle to decide the fate of Europe, through Napoleonic and American Civil War battles, to World War II, Korean, Cold War, and current hot spots including a potential nuclear battle between Pakistan and India: Showdown.

The next set of games covered battles from the Pike & Shot era to World War I, while also expanding our 19th century to cover interesting battles such as Pedregal. The newest set of folios include four new World War I battles that let you game a different battle from each year of the war.

The Folio Game Series provides dozens of games using the same 8-page Standard rules (Musket & Saber for 19th century battles, Fire & Movement for 20th century battles, Fire & Movement World War I for WWI battles, Battles of the Medieval World for medieval battles, and Pike & Shot for early gunpowder battles) with a short Exclusive rules sheet for each individual game to capture the unique aspects of each battle. These standard rules are an update of the SPI classic folio/quad game rules and provide for greater historical accuracy. For example, now cavalry and artillery have their unique characteristics in the Musket & Saber series – artillery conducts bombardment to disrupt infantry and cavalry can charge, and infantry can form squares, skirmish or charge.

The folio game series takes only minutes to learn and once one game is played, players can immediately play many more scenarios with the same standard rules. Most folio games have a 17” x 22” map and 80-100 counters so set-up takes only a few minutes and most games take 60-90 minutes to play. The folio games are presented in a folio rather than a box for easy storage and transport.