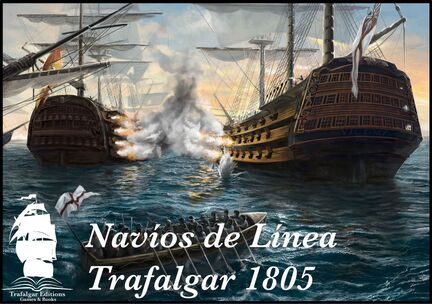 Ships Of The Line Trafalgar 1805

Ships of the Line is a naval combat system that simulates battles between 1740 and 1815 at the tactical level. "Trafalgar 1805" recreates the clash between the British fleet - commanded by Admiral Nelson - and the Spanish-French combined force - led by Admirals Villeneuve and Gravina - that took place on October 21st, 1805.

The plastic pieces represent the actual ships that fought the biggest pre WWII battle, excluding Lepanto. The game is meant for 2 to 3 players: one player always takes the British side while the combined Spanish-French force can be played by another one or split in two, with each player taking command of one of the nationalities. It can also be played by any number of players, giving them command of just some of one side's ships. Before starting the game, players should agree on wether they will use any optional rules.

After setting up the scenario by the playbook, play proceeds in turns. Each turn consists of the following phases:

Players determine initiative. Initially, it is held by the British side.

1.- The initiative player fires his cannons, any hits are not applied yet.

3.- Any damaged caused by both sides is now applied simultaneously.

1.- The non-initiative player moves his units.

1.- The initiative player moves his.

After turn 24 is completed, calculate victory points for sunk, captured or damaged ships and determine the winner.