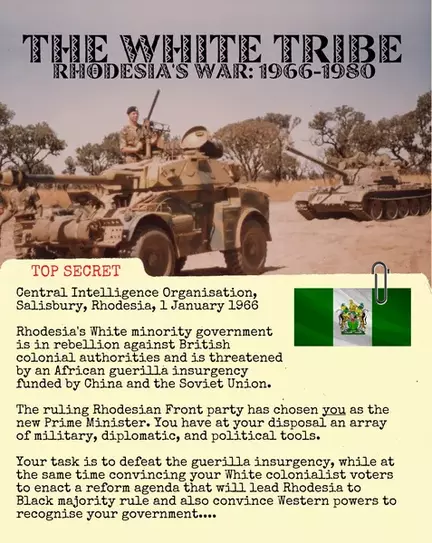 The White Tribe is a unique SOLITAIRE game with military and political aspects.

You play the White government of Rhodesia, besieged by a Black guerilla army, using your potent armed forces to hold it back while you try to persuade your colonialist voters to compromise and move to a system of Black majority rule.

The balance of military and political factors makes for an intriguing and very different sort of game; you'll fight guerillas, fight elections, and even pass bills with the same level of tension!

Advancing generous policy positions, to win over African public opinion, can endanger you with the European voters you depend on for power.

At the same time, you have to persuade foreign states that your reforms are moving forward -- they have different visions for Rhodesia than you do, and they can bring you down with economic sanctions or military strikes.

And looming over you are the unstable Portuguese, whose empire in Mozambique is vital to your strategic safety!

Your aim is to build a government based on justice and equality, while holding off extremists on every side using all your military and political tools.