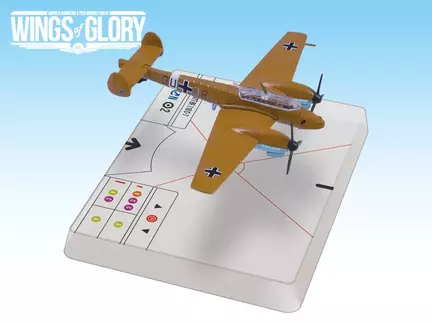 Kræver Wings of Glory: WW2 Battle of Britain Starter set for at spilles!.

The Messerschmitt Bf.110 was a twin-engine heavy fighter in the service of the Luftwaffe during World War II and served with success in the early campaigns, the Polish, Norwegian and Battle of France.

Later in the war, it was developed into a formidable night fighter, becoming the major night-fighting aircraft of the Luftwaffe. Great Aces that gloriously piloted this aircraft were Fritz Schupp, Georg Christl and Günther Radusch.

Designed to be used with the popular air combat game system created by Andrea Angiolino and Pier Giorgio Paglia, each WW2 Wings of Glory® Airplane Pack is a ready-to-play model, painted and assembled, 100% compatible with any other WW2 Wings of Glory game product.

In each pack you will find all you need to play with the airplane: a special base with gaming stats, a variable altitude flying stand, and a specific deck of maneuver cards.