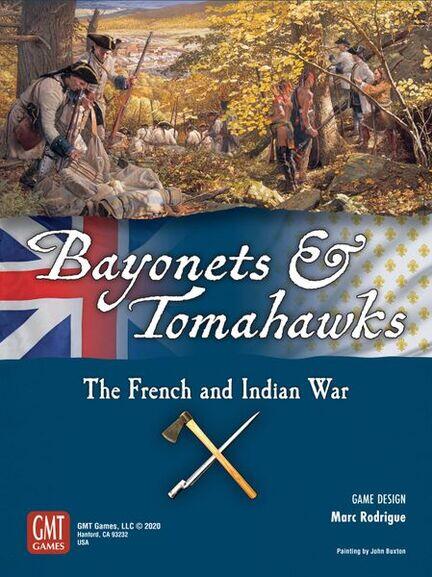 Bayonets & Tomahawks (B&T) is a 2-player strategic game focusing on the French & Indian War 1755-1760. Its fluid yet rich system ensures fun for players of all levels. One player controls the British and the other controls the French and most Indians. Indian diplomacy, raids, constructions, naval operations, sieges: nothing is left out in order to immerse players in the fascinating military asymmetries of the 18th-Century colonial frontier.

A game of B&T can last 1 or more game years depending on the scenario chosen — up to the full conflict. During each game year, there are 8 action rounds where players move their pieces on land and sea, perform raids, build forts and roads, etc. Battles/sieges usually occur at the end of each action round. A game year also includes 3 logistics rounds: “Fleets arrive”, “Colonials enlist” and “Winter quarters”.

B&T is card driven. But unlike most card assisted war games player don't manage a hand of cards. Each player starts the year with one undisclosed reserve Action card picked randomly. At the beginning of each Action round, both players draw a new card. They must then choose one of their 2 cards to play for the current round. The other card becomes their reserve for the next round. At each action round, the French player also gets a random Indians action card.

The Action points (AP) on the cards in play determine how many stacks of pieces a player can activate during the current round. In addition the cards trigger events and determine initiative for the next Action round. Movement is point to point. Pieces can also move via sea zones.

Each side has particular assets he must make the most of in order to achieve victory. The British have overwhelming numbers, the French are more adept at wilderness fighting with the help of their numerous Indian allies. To win, a player must control enough enemy key spaces to reach the scenario’s Invasion victory points requirement by game end. In one-year scenarios, pieces removed permanently from play yield Invasion VP as well. The French player can also win if he succeeds in enough raids during the current year to reach the scenario’s Raid victory points requirement.

By its nature, the game lends itself to solitaire play. In bonus, the rules allow to split the actions of each camp methodically. This way, up to 2 British players (British, Colonial) and 3 French players (French, Canadien, Indian) can relive the historic pains of shared command.﻿