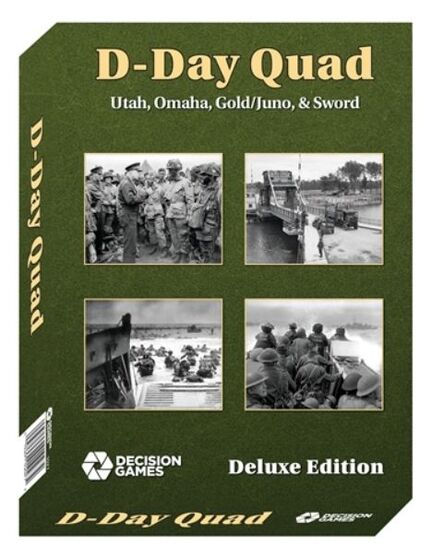 The Allied invasion of Normandy was a watershed moment in the war.

Months of careful planning proceeded while the entire uncommitted strength of the American, British, Canadians, and other Allied armies massed in England. Across the Channel the Germans strove mightily to create hardened defenses on the beach and back them with a slew of new and veteran divisions. The clash came in the early hours of 6 June 1944: D-Day. If the Allies failed to grab a large enough beachhead the invasion would be contained and eventually crushed. If the German lines broke, the full weight of Allied power would be loosed to drive deep into France.

The D-Day Quad uses the Fire & Movement system, designed to highlight the ability of motorized units to mass quickly for breakthrough and exploitation. Support fire, representing weapons ranging from mortars through cannon and light ground attack aircraft to heavy bombers, provides the extra punch to overwhelm a defense or shatter an attack. Winning the battle is a matter of maneuver, firepower, and asset management.