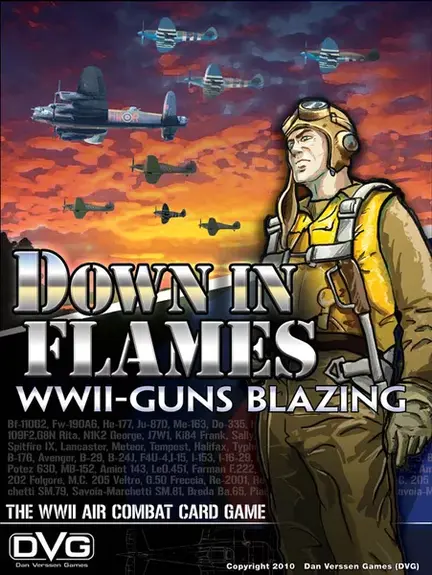 Down In Flames . Guns Blazing

Guns Blazing is the 2nd game in the Down In Flames series. This stand-alone game adds 63 more types of aircraft, new campaigns, and action cards featuring the new aircraft!

Down In Flames places each player in the cockpit of a Leader and Wingman as they enter combat against other aircraft. By playing cards, you gain advantageous positions on your targets, fire your guns, and send them down in flames!

The game is based on a unique action-reaction card mechanic. Each card can be countered by specific other cards. At the bottom of every card is the list of cards it is allowed to cancel. This makes for exciting card play back and forth between players...

The air combat is simulated using a Positioning system that allows aircraft to be Advantaged, Tailing, Disadvantaged, or Tailed in relation to other aircraft. An aircraft’s position determines if it can attack, and how many bonus Bursts it receives if it is Advantaged or Tailing.

The game uses a simple Altitude system to add this vital aspect of air combat. Aircraft get to draw cards when diving, and must discard cards when climbing.

The game also includes Light, Medium, and Heavy Bombers that are used in the historical campaign games.

The aircraft and campaign list is still a work in progress. In the end, there will be 63 different types of aircraft totaling 126 cards, and 6 campaigns.