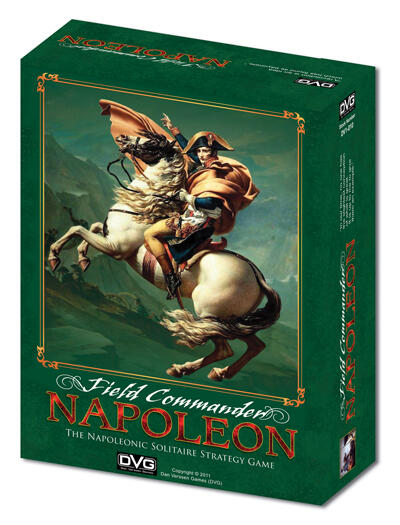 Field Commander Napoleon DVGs biggest game to date, as befits the Empire, the Emperor, and his Grande Armee! The game is so massive it requires a 4" high box!The game design focuses on the battlefield tactics and Napoleon's powerful personality. Through political and military cunning, Napoleon swept France to super-power status. In previous Field Commander games, supply was a primary concern. As the Emperor himself said, "An army travels on its stomach." In this game, Napoleon's achievements and public adulation drive all facets of game play. Be successful, gain the support of your troops and your countrymen, and you can achieve anything!The game spans all of Napoleon's campaigns from Italy in 1796 to Waterloo in 1815.Success depends on the vital balance between strategic and tactical focus. You must move your forces across the maps to achieve your strategic goals, but you must also out-think your opponents on the battlefield.You can play each campaign as a stand-alone game, or as part of a linked series of games.The 11 Campaigns include:First Coalition 1796Egypt 1798Second Coalition 1800Third Coalition 1805Fourth Coalition 1806Spain 1807Fifth Coalition 1809Russia 1812Confederation of the Rhine 1813France Invaded 1814100 Days 1815Each campaign has its own unique set of force counters that accurately detail the divisions and corps that participated in the campaign.The force counters are a rectangular 0.625" by 1.25". This allows the use of Line and Column Formation tactics in battle! Each Force has a troop quality: Elite, Veteran, Line, Poor Line, or Conscript.You command the French forces in your bid for world domination!You command your forces forward across the continents! You command your forces across the battlefields of Europe, Asia, and Africa!When you return, covered in glory and riches, it is you the citizens of France will be cheering!Component List:7 Large Full Color Wibalin-Wrapped Mounted Map Boards (11" x 17")6 Full Color Counter sheets1 Full Color Battle Map Board (8.5" x 11")1 Full Color Player Log SheetRulebookReplayability:The flexible game system, optional historic rules for each campaign, and the Lifetime Immortality system maximize replayability.Target Audience:This game is perfect for fans of Napoleon and solitaire games in general. The complexity level is ideal for both beginners and experienced gamers.