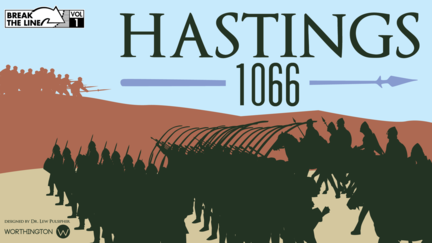 Two players battle each other by aligning their cards that represent their units into battle columns. Your choice of battle formations will decide who wins the field that day. The Saxon player's army is led by Harold Godwinson (King Harold II). While the Norman's army is led by William of Normandy, later known as William the Conqueror because he was lucky enough to survive and win the battle. Will you be so lucky?

The object of the game is to force the enemy to flee or wipe them out.

This game uses a “virtual board”. Two “sides” of the board are supplied, which helps players visualize the central area of the board where the game actually takes place. The players’ troops (cards) outline the shape of the board.

The battle takes place on a grid divided into six columns and seven rows. The rows are shown on the “side” pieces.

If all break in the same player’s turn, Saxons win! You gain a “Major victory” if you also kill the opposing leader and yours is alive. It is a “Minor victory” if your leader is dead, or if both leaders survive.