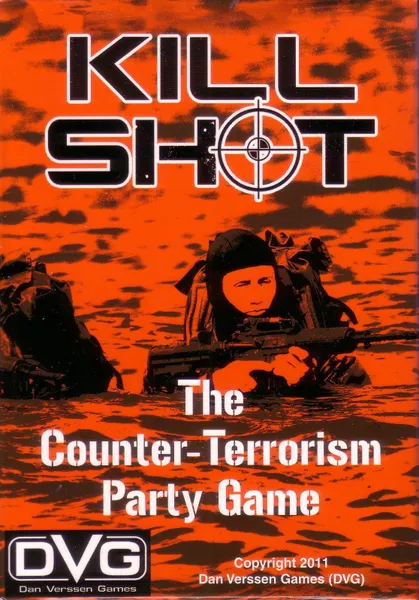 Kill Shot is unlike any of our other games.

Kill Shot is ultra fast paced with each terrorist hunt taking only 1 or 2 minutes. An entire terrorist campaign takes less than 20 minutes.

Kill Shot is a speed card game played in real-time, like a firefight. As you and your friends frantically throw down cards, you’ll scream manly phrases like “Cover me!”, “Jam!”, “Reloading!”, and of course the ultimate “Head Shot!”

This is the perfect party game, convention game, and game to play with all your non-gamer friends. The game comes with 1 (ONE!) sheet of rules.

We have included 3 modes of game play, to match-up with the three basic modes of fire on close-quarters assault weapons (Single, Burst, and Auto). The three ways to play are: “Hunt”, “Head Shot”, and “Situation Room.”

In addition to the core rules, we’ve included add-on rules that can mix and match however you like with the core rules. Kind of like the lights, lasers, and suppressors that can be added to modern firearms. These include high-impact options such as: “Hot LZ”, “Taliban”, “Night Mission”, “One Shot One Kill”, and “Reign of Terror”.