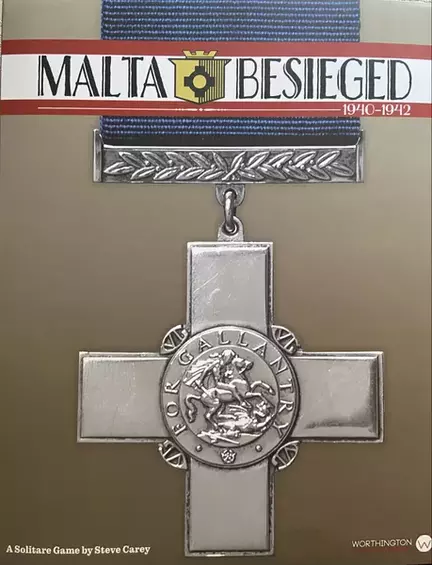 You are placed in the role of the Commonwealth Commander in the theatre, and must utilize every resource at your disposal to fend off unrelenting Axis attacks in order to ensure the survival of the island of Malta.

Malta Besieged features both familiar and innovative game play. Supply was the key element in the Mediterranean Campaign, and so it is here as well. Players will have to safely shepherd vulnerable convoys - and their valuable cargoes - in order to effectively wage war. With the ability to trade Supply for extra Actions at the most crucial moments, this places an additional emphasis on that precious resource and also creates extremely tense convoy battles which will resolve as the game progresses.

ULTRA is a crucial asset in the game, but beware of Axis counterintelligence! Spitfires can rule the skies, Gibraltar can block U-Boat advances, Operation Herkules is a constant threat, and Admiral Cunningham himself can intervene on occasion.

North Africa is not treated as a mere sideshow; indeed, the struggle with Rommel, the "Desert Fox", holds the ultimate key to victory... if Malta can hold out against the constant pressure.

If a fortified Tobruk manages to stubbornly delay the vaunted Afrika Korps long enough, then General Montgomery and his battle-tested 8th Army can possibly make a final dash from El Alamein to capture Tripoli and secure a glorious triumph.

Large Hard mounted game board of the Mediterranean

New Art for All Game Components