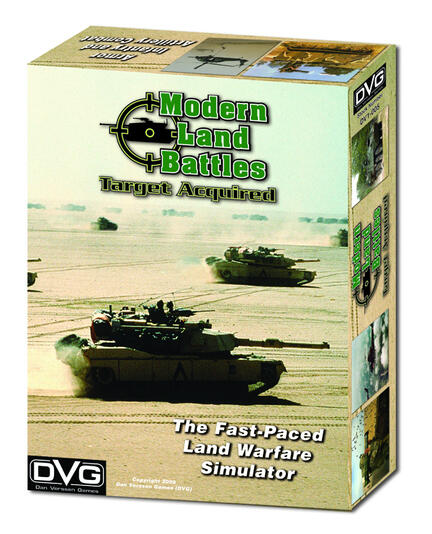 Modern Land Battles (MLB) - Target Acquired uses the core game mechanics from our award-winning Modern Naval Battles game, but then expands them to 3 combat areas on the table: Terrain, Breakthrough, and Flanking.The cards will be beautifully printed with full color on both sides with rounded corners. The box size is 9" x 12" x 2".This new game features forces from 7 different nations: USA, USSR, UK, China, Israel, Insurgent, and Arabian Multinational. This gives you the forces you need to play out battles during the Cold War, Six-Day War, Iran-Iraq War, Vietnam War, Lebanon War, Yom Kippur War, Falkland Islands War, and Gulf War.The game system maximizes player decision making to make every turn exciting. At the start of the game, you get to select a nation's ground forces to command. Then, you get to select the specific armor, infantry, and artillery forces that you think is the best battle force. Once selected, you'll get to battle the forces selected by the other players in order to capture and secure vital objectives!

For manual: TRYK HER
Unboxing: