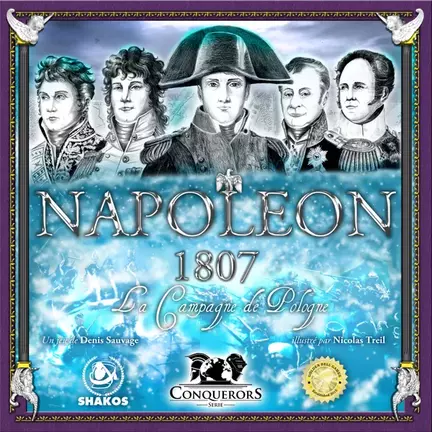 After the defeats of Auerstaedt and Jena, Prussia collapsed but has not yet surrendered. Their Russian ally arrives by the east to defy Napoléon. The tough Polish campaign is beginning.

When the game meets History

Napoléon 1807 is a game at the crossroads of History and simulation. It uses the same game system as Napoléon 1806.

With Napoléon 1807, in 1 to 2 hours, two players will relive the clashes between Russians and French in the heart of winter 1806-1807 in Poland. Three campaigns are proposed that retrace the terrible events that will culminate in the famous battles of Pultusk, Eylau and Friedland.

Napoléon 1807 is intended for seasoned grognads as well as for young conscripts who want to try a new playfull sensation. Strategy, anticipation, decision, are the engines of the Napoléon 1807 game system.