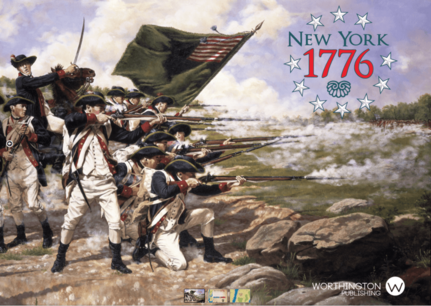 Group movement can only be done with commanders and some commanders can move faster than others.

The British win by capturing Washington or reducing his army and holding New York City at the end of the game.

The Americans win by avoiding British victory or reducing the British army to less than 20 strength points.

This campaign involved the largest number of troops of the war.

It unfolded with an intricate set of maneuvers around New York City and its waterways involving a large British fleet executing numerous amphibious landings in an effort to trap the Colonials.

It was truly the best opportunity the British had for capturing Washington and America’s entire army.

Historically, the Americans just barely escaped to live and fight another day.

Can you, as the British player, defeat the American army and end their revolution in its infancy? Or as the American player can you, like Washington, defend your country while avoiding disaster? The decisions are yours…