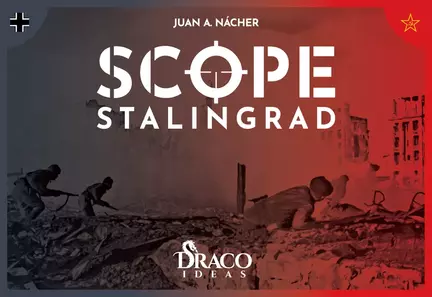 A fast and immersive game of 5-15 minutes per match, with various levels of difficulty and rules that are explained in two minutes on the clock.

When you try it, you won’t be able to stop playing it.

SCOPE is a game of strategy, cunning, and bluffing that will make you feel like a real sniper, searching and selecting your targets, shooting wisely and changing position so as not to be discovered and eliminated.

GAME SET UP: each player places their Area Cards face down, in a rectangular matrix that forms their Front. You can arrange the cards anywhere. The number and type of cards depends on the chosen Scenario. A player can look at their cards whenever they want during the course of the game.

OBJECTIVE: The player who first eliminates all the Snipers of the rival team or who first reaches the Objective Points of the chosen Scenario wins.