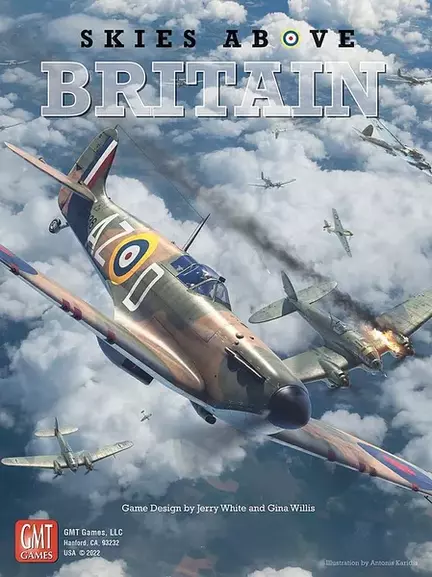 Skies Above Britain is a solitaire game depicting a Royal Air Force squadron of Hurricanes or Spitfires waging a desperate effort to disrupt and destroy German daylight bombing raids over southeast England in the summer of 1940.

The player’s individual aircraft—each represented by a stickered block—must locate the incoming raid, intercept it, and evade or defeat swarms of escorting German fighters that usually outnumber you and whose pilots have superior experience and tactics.

The game simulates the dogfighting and fighter-vs.-bomber action at an individual aircraft level using a card-assisted system that simulates key tactical decision-making without losing the feel of fast-paced aerial combat.

A player can fly scenarios representing an individual patrol or use the patrol generator to create an endless variety of realistic individual patrols, multi-patrol campaigns, or larger campaigns covering the entire Battle of Britain.

Each patrol will take a half hour or more to play, while a campaign can last anywhere between 6 and 28 patrols.

Sequence of Play Card Deck for Skies Above Britain.  TRYK HER

For regler:  TRYK HER