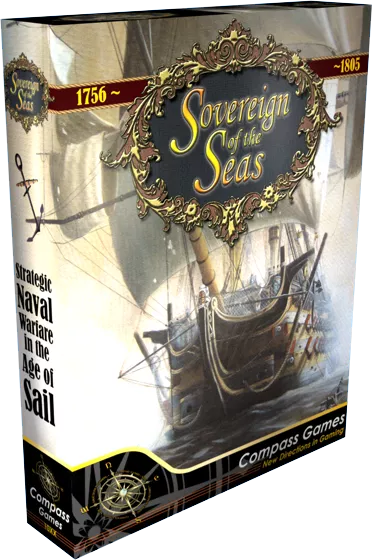 Sovereign Of The Seas

The game depicts this conflict at a strategic level, with most operational and tactical details represented by fast and easy-to-play systems, rather than intricate mechanisms.

The intent of the game is to provide a broad overview of the historical events while being fun to play.

SOVEREIGN OF THE SEAS owes its original inspiration to the game concepts of WAR AT SEA published by The Avalon Hill Game Company, a game which covered the war in the Atlantic in World War Two.

SOVEREIGN OF THE SEAS borrows a number of these concepts from this earlier game as a starting point, such as area movement, individual capital ships, individual leaders, battle line resolutions, and rolling sixes to hit, and then diverges significantly to reflect the sailing warship era situation.

The object of the game for the English player is to destroy the naval forces of the European Powers player and prevent them from obtaining control of vital sea areas around the world.

The object of the game for the European Powers player is to escape the forces of the English player and obtain temporary sea control of vital areas to support the continental and colonial objectives of various European nations.

For Regler: TRYK HER

One Box and Lid set