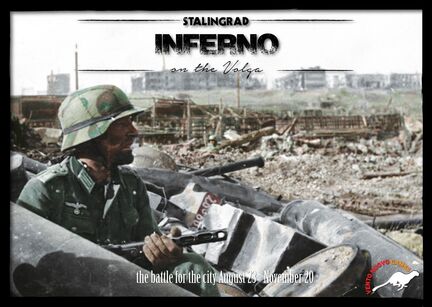 Stalingrad Inferno on the Volga

Inferno's map is generated from highly detailed air recon photographs and depicts both the city and outskirts in extreme detail, as it was in August 23, 1942, when the battle began.

The map scope includes the main city and the its suburbs from Lateschanka to Kuspornoe, along 30 km of the volga river, and extends to the west as far as Gumrak Airfield, Orlovka, and Alexandrovka.

The wooden-block units in the game represent regiments for the Germans (with some assault battalions) and brigades/divisions for the Soviets.

The game has one campaign, covering August 23 to November 20 and taking from 1 to 2 hours to play.

The unit wooden blocks provide fog-of-war and easy recording of strength, while a card-driven system that allows for key historical events and dramatic surprises in battle...