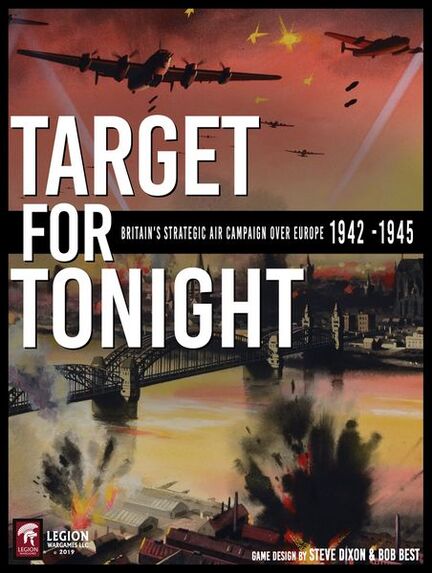 Target for Tonight is a solitaire game that recreates Britain's Strategic Bombing Campaign against Nazi-occupied Europe during the Second World War. The game covers 1942-1945 when the British decided to use night area bombing against German target cities, and the Germans developed a cutting-edge night fighter defense system.  Engelsk manuel.

Target for Tonight is designed to provide YOU, the player, with the ultimate gaming experience: depicting the same types of events and decision-making processes experienced by RAF pilots who flew the real-life night bombing missions.   Now, YOU are in command of an individual RAF bomber on an individual NIGHT MISSION over Hitler’s Third Reich. Choose to fly the four-engine Avro Lancaster, Short Stirling, Handley-Page Halifax heavy bomber or the twin-engine Vickers Wellington during the mission. Twelve campaigns are provided, each a series of individual missions to form the player's operational tour of duty. Just as it was in real life, the objective of the game for the player is to survive their operational tour of duty with the RAF.