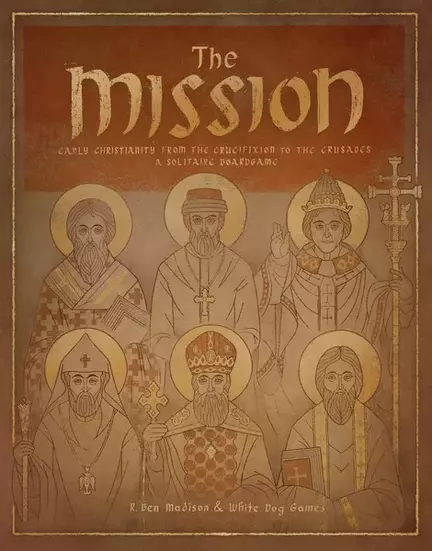 The Mission: Early Christianity from the Crucifixion to the Crusades

While the secular world of empires and politics plays out around you, your apostles and missionaries spread the faith, translating the Bible and converting areas of the map to Christianity. Each turn covers several decades. The flow of play teaches players about the expansion and doctrinal battles of early Christianity while you build institutions like universities, hospitals, and monasteries to educate, heal, and inspire the societies you touch.

Internally, heresies and schisms in the Church will try to thwart your plans while external forces threaten you. Pressing against you are barbarian hordes, some of which you may convert. And when the armies of Islam arrive, the game changes from one of missionary outreach to one of survival, as Christian communities hunker down under siege during the long Dark Ages. Perhaps you will rise again in a blaze of

glory as Christendom finally fights back, using the Crusades and the Spanish Reconquista to recover lost provinces!

Beginners and experienced gamers will find this an intriguing and very different kind of game. While certainly a war of ideas, it is still very much a war game, where victory depends upon managing scarce resources (including Holy Relics!) and making shrewd strategic decisions to benefit the Church. The Mission is a power-politics overview of the Early Church from its beginnings through the Crusades, but one that never loses sight of the importance of church-building