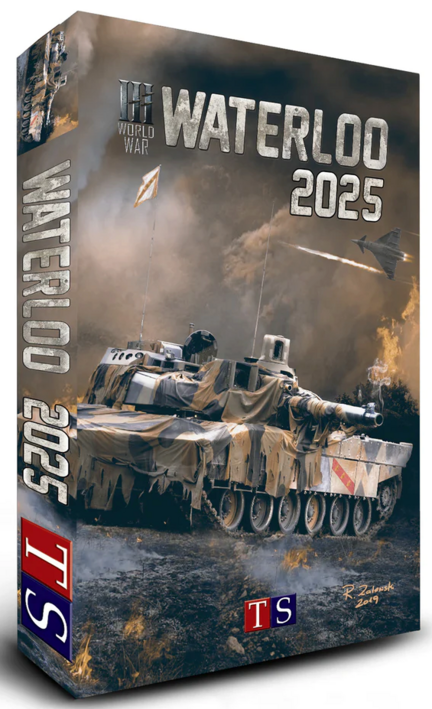 The energy and social problems caused divisions in the NATO army.

The French and the British stood against each other.

Meanwhile, the Russian army and the contingent of the reconstituted German People's Army that supported it attacked from the Ardennes towards Brussels and Gent.

At the end of the fighting, three American divisions supported by helicopters and attack aviation entered the fighting.

The player can become the commander of one of the sides and see the currently functioning military equipment, including modern tanks, aviation and artillery.

There are 4 hypothetical scenarios in the game:

The German-Russian offensive in the Ardennes ended in early February. Both sides announced their victory.

The front lines ran along the Meuse line with several bridgeheads at Liege, Namur and Dinant.

The Red Army and the newly formed forces of the National People's Army of Germany prepared for a new strike, waiting for the change of weather and the attitudes of the Western Allies to soften.

Government buildings and a few military posts were under heavy fire.

In less than 24 hours, almost all of Brussels key points passed into the hands of the enemy.

The battalions of the M Brigade crossed the cordon of Belgian troops under the cover of the night and seized neighboring towns.

Belgians were quickly losing control of their country.

To prevent this, an order was issued to resist at all cost. The fighting lasted for seven days and brought serious losses to both sides.

The energy crisis and the recent clashes with the M Brigade made the Walloon government to ask for military and humanitarian aid from neighboring France.

The government of Flanders immediately did the same, but in United Kingdom.

The central government completely lost control and did not intervene.

At first the situation seemed to stabilize, but as the first French and British troops began landing, clashes broke out between the ground forces.

Brussels and Grimbergen airfields (both in Flanders) were captured by France .

The British demanded to leave them, which the French did not agree to, justifying it with temporary logistical issues.

The first shots were fired and TV stations showed the wounded and killed soldiers.

The situation became critical and open conflict between the former allies began to escalate quickly.

Artillery and air force were activated, and to make matters worse, the militia of the M Brigade joined the action, supported by Russian propaganda and supply.

2025 The short yet bloody battle for Bruxelles left both French and British forces exhausted.

Their units suffered about 50% losses. That's what Russians were waiting for.

Their 1 Guards Armored Army and 6 Army, still weakened after previous battles, launched their attack on Bruxelles from the south.

Three brigades of the German People's Army attacked from the north.

Equipment and people changed, but not the directions of attack.

French units took their positions on the river Dyle.

Meanwhile, the allied forces still tried to get rid of the Brigade M which, like a Hydra, was reappearing again after every battle.

Belgian 7 Mechanized Brigade, reconstituted in Gent, was about to enter the action too.

Only Gent and Antwerp remained in the allied hands.

Meanwhile, V Corps of the US army was gathered in the southern France, with a goal to destroy the enemy.

Three American brigades, supported by the Polish division and French brigades, were about to launch an attack on the entire front.

Allies started their offensive at July 1, however, Russians and Germans were prepared for this.

Fights turned out to be extremely fierce and bloody.

Till July 9, the allied forces reached Bruxelles and get around the city from the east.

Fights moved near Leuven, where allies tried to close Germans and Russians in cauldron with a pincer attack.