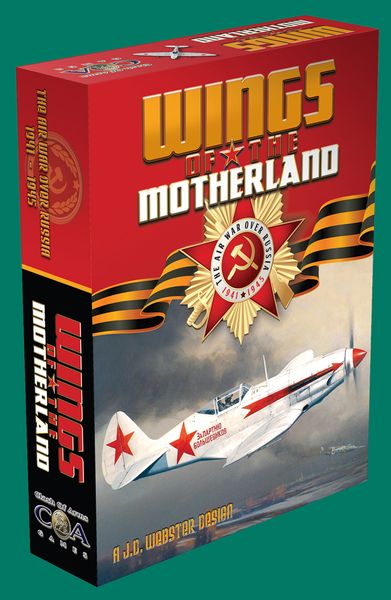 Wings Of The Motherland

Fighting Wings game system (Volume 4) goes to the Russian front, modeling aircraft and situations from the German invasion of Russia in the Summer of 1941 to the fall of Berlin in 1945. Engelsk manuel.

48 new aircraft ADCs (very few duplicates from previous games and if so these are updated with better information), two double sided maps for four unique playing surfaces and two full counter sheets of air and ground units, one half counter sheet of ships and play-aid counters, plus the third edition rules and playa aids for the Fighting Wings system.

This game builds on the Whistling Death game Fighting Wings rules. All Whistling Death errata is incorporated and subtle changes make this sophisticated system easier to use.

220 scenarios planned, showing evolution of fighter combat, close air support and the low altitude air war that was the Russian front's primary characteristic. Much more emphasis on air-to-ground than in previous series. A number of air naval scenarios as well.